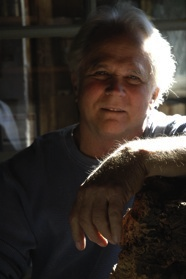 Tony Dow was born in Hollywood, California in 1945.  Exposed to creative parents and a home frequently filled with his parents’ eccentric and artistic friends, it was no surprise that Tony developed a love for art.  At an early age, he showed an unusual talent for imaginative abstract composition and drawing.  An accomplished athlete, in his youth he held numerous diving and swimming titles, including national age-group records.  In 1957 he was chosen for the role of “Wally” on the hit television show, “Leave It To Beaver”, an event which would change the course of his life.

After the show ended in 1963, he became a member of the “General Hospital cast and made guest appearances on a variety of television shows.  In the eighties Tony began a career in TV directing and producing that continued for twenty years.  Throughout his lifetime he has been involved in many forms of creative activity.  He has been an actor, director, writer, visual effects designer, producer, home builder, woodworker, painter and sculptor.  A long-time goal has been to return to sculpting.

In the early 2000’s, Tony began to creating beautiful designs produced from burlwood.  Some have been  sold as original wood sculptures and others have been cast in bronze.  Tony’s talent in the area of modern sculpture was confirmed when one of his bronzes was chosen for exhibition at the Salon 2008 de la National des Beaux Arts in Paris.  He was one of only two U.S. sculptors selected to exhibit at this annual juried show at the Carrousel du Louvre.  Tony also has exhibited at the  Karen Lynne Gallery, Topanga Canyon Gallery and the Morgan Gallery.

CCurrently his art is being represented by the Bilotta Gallery in Ft. Lauderdale Florida 954-626-0410.

IIn addition to his bronze sculpture and uncast burlwood work, Tony’s series of originals:  Artifacts, Cityscapes and Assemblages incorporate a variety of materials to contrast natural and man-made objects.

Now a grandfather, Tony and his wife Lauren, an artist as well, reside in their handcrafted home nestled in the Santa Monica Mountains of Southern California.